Pope Francis will declare Blessed Teresa of Kolkata
a saint at the Vatican Sept. 4, 2016
MOTHER TERESA
Miraculous Events and Treasured Mementos
In 1970, after completing my high school education, I enrolled as a student in the Department of Architecture, at the University of Pretoria. Although I was a dedicated student, I decided to switch courses and after an additional 4 years of study, eventually received my degree in Fine Arts.
As an enthusiastic little child-artist, I would carefully dip my old fashioned nib-pen into the glass bottle, filled with India ink and proceed with my first messy attempts at rendering pen drawings of flowers or figures. However, my childhood interest in this graphic medium was immediately rekindled when, as an eager student of architecture, I became acquainted with and mesmerized by the range of possibilities of the professional Rotring pens, capable of producing drawings that boasted delicate and ghost-like lines, resulting from the emanations of a 0.1 pen point!
Although these lines were spider web-like and ultra-delicate, the contrast of the black ink on the white paper was immediate and harsh and thus perfectly suited for architectural and character studies.
For several years I had been aware of and increasingly inspired by, the selfless dedication of Mother Teresa. Whenever photographs of her appeared in newspapers or magazines, they would invariably illicit an immediate and powerful, emotional response in me. Therefore, it was inevitable that an image of her, protectively holding and pressing an emaciated child against her own fragile little body, would act as inspiration and catalyst, for me to lovingly and laboriously, eventually put pen to paper, in 1972. 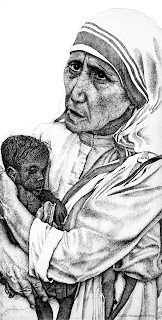 I’ve long ago come to terms with the fact that I could be labelled a Paradox Junkie. The flowing, white robes swaddling Mother Teresa, beautifully contrasts with the leathery, black skin of the half-clothed child she is holding in her arms. From her cave-like, imploring eyes, the hypnotic expression hovers between that of accusation and that of begging and reflects the harsh reality of our fragile humanity. Life and death continue to remain unlikely neighbors as her parted lips silently utter and express the whispers, cries and vulnerability of the suffering soul, that heroically and defiantly shines through the dying child’s as well as her, eyes.

There are lengthy periods of careful consideration whilst using this medium to construct one’s subject matter. First of all, there is the tentative outline which is then followed by the meticulous and time consuming build-up of countless layers of rapid crosshatching. This technique acts as metaphor for the development and process of one’s life. Mistakes cannot be corrected and it is only by repeating several layers of seemingly insignificant effort, that a powerful and visible end result is achieved.

Since the earliest times, it has been rumored that artists capture a portion of the essence of their subject when copying their likeness.  Could this possibly account for the fact that I am so deeply contented to my subject once I’ve completed a work of art?

In 1985 I set about organizing a group exhibition in my gallery with the following theme: ‘A World Beyond our Vision’. The well-known and beloved South African Reverend, Johann Symington, was the opening speaker, whilst my image of Mother Teresa, adorned the invitations. I requested the printer to increase the run but to omit the text so that I would have a stockpile of blank cards with only her image on the cover.

Then, after more than 2 decades, Mother Teresa visited South Africa.
My husband, who is a medical doctor, regularly assisted with operations at the Little Company of Mary Hospital situated in Groenkloof, Pretoria. Trying but failing to suppress her excitement, Sister Mary informed him that Mother Teresa would shortly be visiting the hospital and that they were busily preparing for her imminent arrival.
I was exhilarated on hearing the news and the prospect of a personal meeting with my ‘inspiration’.
However, due to unforeseen circumstances and to my utter dismay, I was unable to attend the function in honor of Mother Teresa.
I simply had to find some small way in which I could still feel connected to the momentous event and so out of desperation, on the morning of her visit, I begged my husband to pass by the hospital and ask Sister Mary to hand out the cards I had hastily given him, as a memento of the day, to the fortunate guests attending..
We were well acquainted with the Administrator of Transvaal, Danie Hough and his wife Mignon. A few days later, I once again, through circumstances beyond my control, missed the second opportunity to meet Mother Teresa when the couple officially escorted her on the last leg of her visit to South Africa and spent some time talking to her in the VIP lounge of Jan Smuts Airport, shortly before her departure.
However, several days passed and I was still mourning the disappointment of both ‘non’-events when my husband had to visit the hospital again and he was approached by Sister Mary. She said: ‘Doctor, I have something for your wife’, and handed him an envelope containing one of my cards. She explained: ‘When Mother Teresa saw the cards at the gathering, she inquired as to whom the artist was that had drawn her portrait. I informed her that it was one of the doctor’s wives but that she was distressed at being unable to attend.
On hearing this she asked for a pen and one of the cards and wrote down the following message on the inside:
GOD BLESS YOU
Mother Teresa
‘Please give this to her’.

Only a few days after this turn in events, Danie Hough also paid us a visit and said that ‘he had something for me….’ whereby he handed me an envelope containing a photograph. This photograph depicted an image of Mother Teresa, himself and Mignon, seated in the VIP lounge and in deep discussion.
On the photograph Danie Hough had written the following: ‘Aleta, dit sou ‘n wonderlike ervaring gewees het om jou ook daar te kon gehad het. Danie.’ (Aleta, it would have been a wonderful experience, if you had also been present with us. Danie) 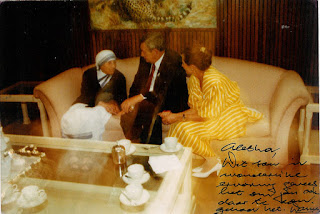 Although it was not meant for me to be physically present at both these rare opportunities that were seemingly within my reach, I have been given priceless mementos which I lovingly treasure.

10 years ago, the deaths of Diana and Mother Teresa within a week of each other, came as a paradoxical double shock to the world. I signed both books of remembrance although of course, when filing along the impossible queues and security measures, to sign one of several books at the British High Commission in Hill Street, Pretoria and smelling the pungent aroma of thousands of decaying bouquets stacked against the security fences, I was not aware of the fact that as soon as the following week, I would be signing another significant book of remembrance, just around the corner, at the Indian High Commission.
In death, Diana was remembered as glamorously and publicly, as she had been portrayed in life.
Sharply contrasting with my experience the week before, I was able to park my car in front of the open Art Nouveau garden gate which welcomed me to walk down the cement garden path and climb the 2 steps onto the airy veranda which completely surrounded the double story home. The heavy wooden front door, flanked by stained glass windows, was ajar, and without hesitation I stepped into the familiar entrance hall of the old Victorian home. Previously this had been the home of Dr.Colyn van Bergen where, in childhood, I had been a guest on numerous occasions to play with my school friend, his daughter, Carin.
I was completely alone and as my eyes became accustomed to the dimly lit interior, I was struck by the serenity, simplicity and authenticity of the ‘display’. The glowing Rosewood panels on the walls reflected the flickering flame of a single candle burning on a ledge and placed next to the open book of remembrance. 2 or 3 small glass vases were filled with blooms picked from the old rosebushes in the garden outside and were already dropping petals onto the crocheted doilies, on which the vases were placed.
Unhurriedly and privately I was able to express and compose my grief on paper.  As in life…. so in death…..

Dear Aleta,
What a marvellous piece of work – your prose is as good as your paintings.
When is your debut novel coming out?
All the best
Vikas

If your wish to be notified when limited edition fine art prints and greeting cards are available, please e-mail your contact details to:aleta@aletamichaletos.com