I will not embroider on the variety of challenges the Universe has been lashing me with the past month (the most of which still remain unresolved.)
But today, I have been utterly and totally traumatized by the most recent cataclysmic event.
Despite the fact that I have no destructive inclinations and my adoration of nature and trees, I had to agree to the death sentence of that which was faultless and innocent.
Two majestic 40 year old palm trees, which were planted when we built our house, were executed this morning.
Whenever I happily sat on our verandah, protected by their dappled shade, the twin pillars reminded me of the two columns, Jachin and Boaz.
The palm is also one of the two attributes of victory, in the sense of elevation and exaltation. This I also sensed deeply and intuitively.
As an artist I express and create beauty with my hands and the shape of the ‘palm’ of the hand and fingers, then also mysteriously gain an additional meaning.
Although the only ‘sin’ the palms were guilty of, was doing what they did best as they excelled at growing upwards, producing leaves and abundant dates. However this, did not save them from an unforeseen, violent and abrupt death.
It was only their vigorous excellence, which caused their downfall.
The most professional tree-fellers and -trimmers have warned us for some time, that the sheer height of our majestic palm trees, now made it impossible and extremely dangerous, to trim the dead leaves and life-threatening sheaths (with dagger points) which (without warning) plummeted to the ground next to us, on a number of occasions.
After the first palm fell, the executioner, Caspir, saw the distraught look of disbelief and horror on my face, as the length of the garden, was instantly filled with one tremendous, earth-trembling thud, releasing aromas that where buried deep inside as well as that of a few crushed leaves of a lavender bush.
As I burst into tears, the executioner was visibly shaken by my response and all he could awkwardly say was:
‘sorry man’……… 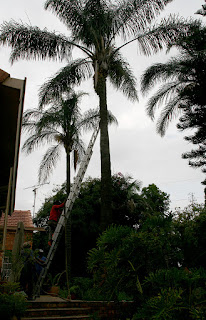 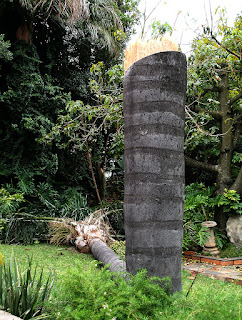 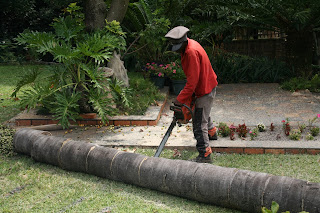