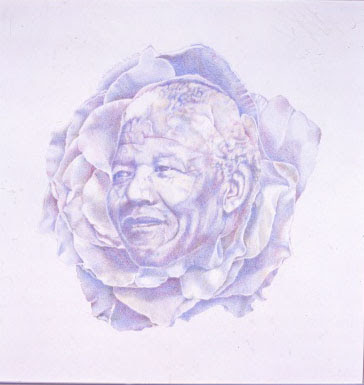 Completion of the second portrait still left me dissatisfied. I had not yet completely exhausted the richness of character and the many facets projected by this MAN. His complexity demanded of me to finally portray his ‘spiritual’ aspect, resulting in: ‘Mandala / Mandela’.
As before, and for similar reasons, I dutifully obeyed the conceptual suggestion to create the work of art in colored pencils. I’ve always been fascinated by the names attributed to us at birth and the impact they subsequently have on our lives. Deeply interested in this aspect, as mentioned, I noticed with amusement/amazement how attractively similar MANDELA and MANDALA sounded to the ear on the one hand and to the intellect on the other.
Mandela had rapidly transcended his political role, becoming the beloved of friend and foe alike. It was evident that he was irrevocably part of a new political/spiritual tri-ad:
Ghandi
Martin Luther King
Nelson Mandela
Isn’t it significant that TWO of these giants herald from South Africa and the other, a descendant from Africa?
A MANDALA, as we observe in the ‘Rose Patterns’ in stained glass windows and the ornamental ‘Floral Patterns’ depicted in Persian carpets as well as the design of the ‘Lotus Flower’ in Eastern and Middle Eastern culture, custom and the decorative arts, depicts ‘something’ radiating from the ‘centre’. However, most remarkable is the fact that a Mandala must by its very nature, surmount disorder. It is, then, the visual, plastic expression of the struggle to achieve order–even within diversity­—and of the longing to be reunited with the centre. Isn’t this is a fitting description of MANdela? This ‘spiritual’, intangible aspect of Madiba is exactly that X-factor that miraculously bonds us together as human beings, disregarding our differences or peculiarities. It appeals to the ‘basic good’ that underscores and permeates our very essence.
The final portrait, represents Mandela as, and in, the ‘centre’ of a ‘ROSE’. He smiles enigmatically, yet confidently. His eyes are fixed on a spot in the future, the place where he has prophetically visualized his beloved countrymen to be, MANDALA and MANDELA have blended ……..
Because we subconsciously believe that ‘things’ will be fine as long as ex(tra) president Mandela is around, we fear a post- Mandela South Africa. He has engineered a great miracle. His name is synonymous with reconciliation and he is our ‘bringer-of–luck’, our ‘lucky charm’, our Talisman,
‘talis-MANDELA’