‘IN THE DOORWAY’ (Persian)

From The Diwan of Shams-i-Tabriz by the Sufi poet Mevlana Jelaluddin Rumi, 13thCentury Anatolia
My eyes gleam because there is Another inside:
If water scalds you, there was fire behind it-understand?
But I have no stone in my hand, no argument here.
A rose garden is known for its sweetness, not thorns.
So what you see in my eyes comes from another universe.
Here’s a world, there’s a world-
I’m seated in the doorway.
Only those that sit between can deliver wordless lectures.
It’s sufficient to give this hint:
Say no more-stop talking and
Reverse the use of your tongue!
TRANSLUCENCE: UNPOLISHED GEMS OF THE ORIENT: SERENITY (THE DOORWAY)
oil on board 700 x 900 mm
2006 Aurangabad India
Sold 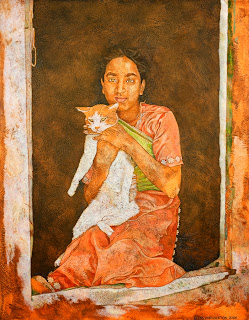 On 27th February 2006 (my birthday), I undertook my first journey to India. My main goal was to visit the magnificent caves of Ajanta and Ellorah near Aurangabat.
On my way to Ellorah the taxi passed through the dark and mysterious interior of the remnant of the old city wall and on exiting, my eyes were blinded by the bright colors of a fruit stall and even by the faded pink, of a young girl’s Sari. Her father offered me a taste of the sweetness of a plump fig he had opened and parted, as well as a bite from a bright red guava with a lily white interior.
Obliging willingly and nodding eagerly, they permitted me to photograph them. I was smilingly and graciously invited to enter their humble and dilapidated little shack, which sat awkwardly on a small rise behind the fruit stall. I photographed the miserable interior & the beaming family. Three or four strides propelled me from the low beamed front entrance, out of the decaying back door. This was the spot where I indicated to the young girl to briefly pause with her cat. As she knelt down, beaming radiantly at me and cradling her cat, her frail little body was framed by the dilapidated doorway.