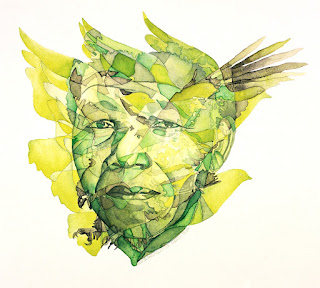 Conceived and executed by Aleta Michaletos in 1994

As part of a solo exhibition titled ‘Drawing Attention to Transformation and Regeneration’, which I held at the Pretoria Art Museum in 1994, I conceived and executed a symbolical portrait of Nelson Mandela, titled ‘Rebirth’. In the same year, ‘Rebirth’ earned the ‘United Nations Art and Philatelic Award’, which was bestowed upon me in October 1994, at the U.N. Headquarters in New York.
I will detail the thought processes behind the artwork as well as that of the two additional portraits that followed. All three portraits were exhibited at the U.N. Headquarters in 1994.
I found myself increasingly fascinated by the ‘conflict’ and paradox, surrounding Mandela. This political giant had spent 27 years, (during the prime of his life), jailed as a terrorist. Yet, the same man, earned the respect and admiration of the world …… he received the Nobel Prize for Peace!
In the painting, ‘Rebirth’, this mental ‘conflict’ is symbolically represented as follows:
7 Yellow ‘Doves of Peace’ fly from left to right and a ‘Black Hawk’, swoops from right to left. Mandela’s head (the features highlighted in green,) acts as ‘arena’ for the ‘conflict’. At last, here is a MAN in whom the opposing forces are reconciled! These images are superimposed, one upon the other. If it were not for the three colors that differentiate the separate images, green, black and yellow (the colors attributed to the ANC), the artwork would simply be an unintelligible jumble of lines.
On closer inspection we note that this image of Mandela subtly suggests the outline of Southern Africa and the wings of the doves and hawk that crown his portrait, could well be ‘laurel leaves’.

The talons and beak of the hawk fall out of the main portrait and suggest that ‘force and violence’ no longer plays a part in his life. Only dynamic power and strength of character remain.