‘EARS ARE FOR KISSING’

‘EARS ARE FOR KISSING’ 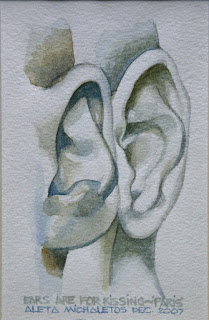 Whenever I visit Paris, I stay in the Cité Internationale des Arts. I’ve noticed that on all three occasions I’ve been there so far, there has been a definite ‘change of direction’ in my work as far as the subject matter and the technique is concerned. I allow myself the privilege of labeling these pieces, as slightly ‘naughty’!

This ‘shift of focus’ can be ascribed to several factors, all of which exert a direct influence and they are as follows:
1)   Traditionally, I visit the Cité during an icy December/ January, which in itself stretches the modest baggage allowance of 23Kg and hardly allows the luxury of excessive amounts of heavy art material. I make do with my paint box containing aquarelles, an aquarelle pad, pencils, pens, notebooks and camera, with which to satisfy my artistic urges.
2)   There is an entire absence of ‘censorship’ during this period of creative solitude. I have the luxury and freedom to express whatever comes to mind, with the additional bonus of being able to destroy the result, without any explanations.
3)   Relieved from the many duties I normally perform at home, I am capable of immediate expression of any idea. The direct medium of aquarelle is totally suitable for this very purpose.  At home, I find myself in the situation of mostly working on a ‘backlog’ and often the ‘freshness’ of the idea is compromised.
4)   Paris is the City of Love and one is surrounded by it, day and night! Possibly, living alone for an extended period increases one’s awareness of what you lack and most probably, previously took for granted. It’s understandable that the amount of  ‘kissing’, ‘pouting’, ‘whispering’, ‘stroking’, ‘touching’, caressing and ‘sighing’ that surrounds you, can eventually become rather overwhelming and unsettling! The sight of lovers everywhere transforms you into a unintentional voyeur…… unnerved, as you watch a lover softly brush away the dark locks of his sweet heart and then gently nibble on her delicate, ivory ear…. it sets your heart racing!
5)   And so, literally bombarded with images such as these, you become saturated and need to find creative relief. Infinite varieties of sculptural, organically shaped little ears, resembling sensual shell or floral motives, become the focus of one tiny aquarelle, saturated with erotic emotion and ‘EARS ARE FOR KISSING’ sees the light!
www.aletamichaletos.com