In 1989, I conceived the idea of ‘Precious Circle’. This was in direct contrast to the ‘vicious circle’, which was unfolding in South Africa at that stage and all the negative events portrayed in the South African press on a daily basis, over a long period of time.

It is intrinsic to my nature to try and salvage something from even the most sombre scenarios, by discovering the positive aspects to it.

After days of deep thought and introspection, I decided to make the ‘enemy’ my ‘friend’!  From now on, instead of criticizing what I read in the Press, or allowing it to influence my psyche, I would take responsibility for what I focused on and what I thought.  My philosophy was that my ‘new’, positive thoughts would influence my actions and following that, my actions would influence society.  This idea, multiplied, could change a complete society as we know it! Daily I became more passionate and energized as I realized the tremendous and far-reaching potential and transforming energies, of ‘Precious Circle’.

Every single day, I made clippings of the positive headlines reflected in South African newspapers and magazines.  These words were eventually sorted into different categories.  Aesthetic collages where then created from these clippings, each portraying a different inspirational theme, such as ‘happiness’, ‘hope’, ‘winning’, ‘beauty’, ‘peace’, ‘dreams’, ‘religion’, ‘morality’, ‘joy’ and ‘peace’. 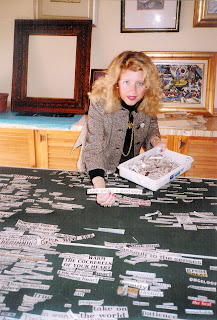 When I started the project, events were unpredictable and the scenario was changing so rapidly, that no one knew with certainty, what the future would hold. At this stage, Nelson Mandela was still in jail.

Although I had no idea where the project was leading me to, I had absolute faith in its power to transform and attract, as I was gradually becoming aware of unexpected and increasing ‘blessings’ that were manifesting in my life.  One such ‘blessing’ was an unexpected invitation to present a retrospective exhibition at the Schloss Ettlingen, in Germany, 1991.  (Up to now, hardly a pipe–dream for even the most well-known South African artists)  I was developing an uncanny conviction that my ‘daily ritual’ was positively ‘magnetizing’ me.

During a very bleak period in South African History, ‘Precious Circle’ became my personal contribution to finding sparks of hope, by literally ‘reading between the lines’.  I was totally committed to perform my daily task until I received a definite ‘sign’ to discontinue my daily practice.

Every day, with painstaking attention to detail, sheer perseverance and almost superhuman effort and discipline, I continued my quest.

Sometimes, out of sheer desperation, I would take a negative word such as ‘unhappy’, cut off the ‘un’ and triumphantly preserve the ‘happy’ and likewise ‘unlucky’ would become ‘lucky!
Concentrating on the ‘positive’ and ‘optimistic’ in a time such as this was like a continuous prayer or meditation and it brings to mind the words of Chagall: ’Work is my prayer’. ‘Precious Circle’ documents the hopes, dreams and aspirations of a whole society caught up in a process of inevitable change, during a crucial time in South African history.  Although ‘Precious Circle ‘has a timeless and universal message, it is vital to contemporary history and its power lies in its simplicity.

A strong sense of color and balance marks each of the thought provoking collages of which the end result reminds one of a carefully constructed puzzle, where the smaller parts fit together perfectly.

The events of May 10, 1994 (the day Nelson Mandela was inaugurated as President), was ‘the sign’ that I was waiting for! Miraculously, the newspapers of 10 May and 11 May reflected and contained all the positive words I had been searching for, for the past 6 years!  At last, the ‘Circle’ had completed itself, resulting in 50 collages, spanning a monumental 22 meters.
During June and July of 1994, I held an unusual dual exhibit at the Pretoria Art Museum.  The one part consisted of a long wall where ‘PRECIOUS CIRCLE’ took pride of place and the second, complimentary exhibit was titled: ’DRAWING ATTENTION TO TRANSFORMATION & REGENERATION’. The latter consisted of a series of drawings and watercolors reflecting the internal and external process of change experienced by every South African. ’REBIRTH’ was included in this remarkable series.  It symbolizes the opposing forces, which are reconciled in Nelson Mandela.

A museum official coaxed me into entering a competition for the ‘United Nations Art and Philatelic Award’.  ’Rebirth’ was the winning piece and thereby miraculously propelled me into joining the ranks of Dali, Chagall, Miro, Warhol and Vasarely, (some of the previous contributors).

From this experience I have learned that ‘luck’ is: when being prepared, meets with opportunity.

The 50th and last collage, created entirely from all the positive words as reflected in the press on 10 May and 11 May 1994.
Fine art prints are available
contact Aleta: aletam@icon.co.za
website: www.aletamichaletos.com