ASTRONOMY to GASTRONOMY
‘CRYSTAL UNIVERSES’
CATALYSTS
Artist and Author: ALETA MICHALETOS 2011
Copyright reserved
Change is the dominating ingredient as well as an irrevocable and inevitable consequence of life. Paradoxically, the inhabitants of Mother Earth have on the one hand, never stopped reeling from these consequences and effects of change, and on the other hand, the foundation and structure of the Universe remain unfailingly consistent and solid.
Soon after the birth of my 4th child and last born in 1986, I became aware of a sharpened focus on and interest in, that which is not immediately apparent. I became conscious of the mysterious and subtly veiled enigmas and paradoxes which saturate our lives and this, resulted in the ‘ALETHEA’ series. http://www.aletamichaletos.com/gallery/Alethea 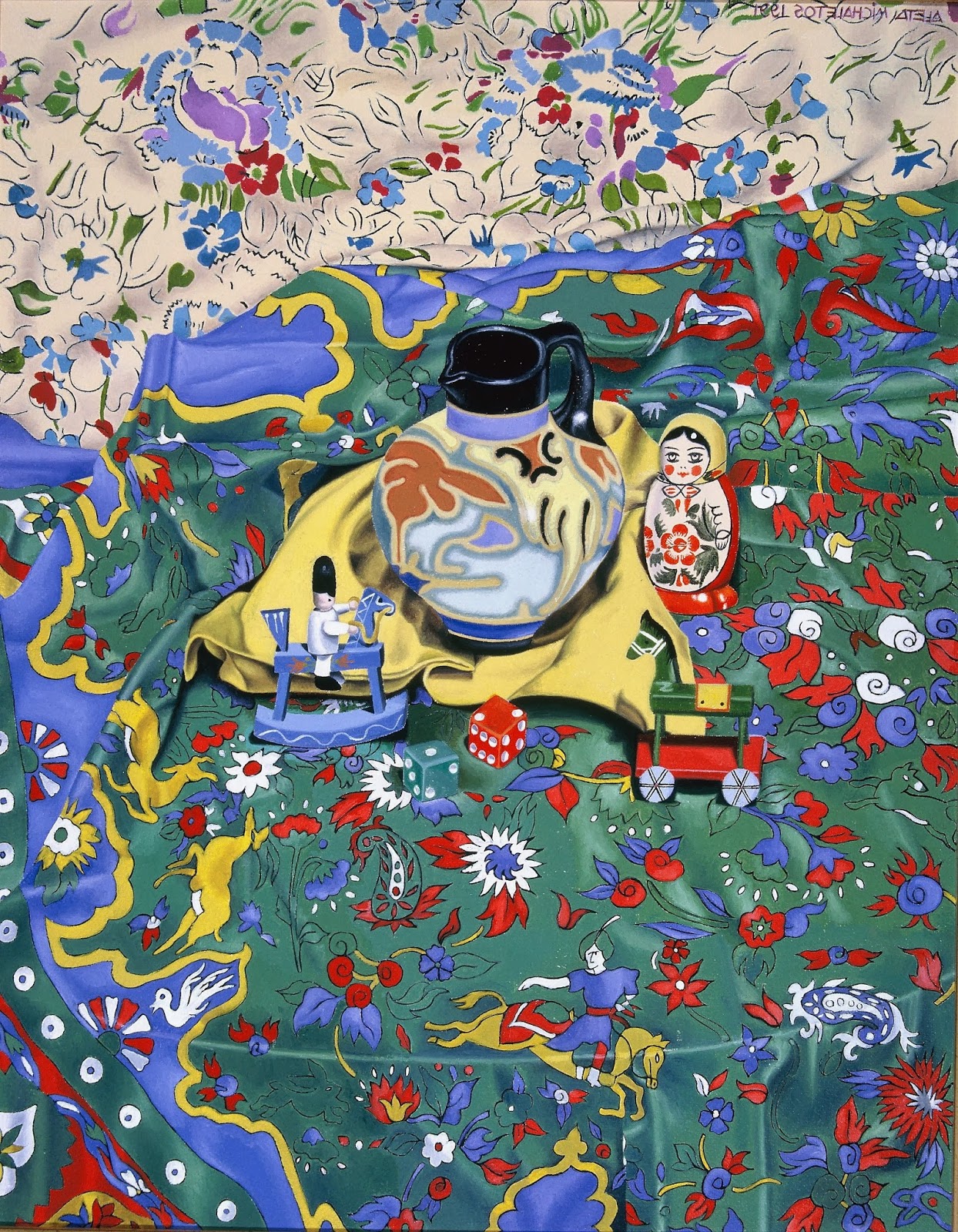 Then, in 1994, directly following my reception of the UN Art and Philatelic Award in New York, a large portion of my creative endeavor was dedicated to the visual exploration of our ‘parallel Universes’ and these ideas have been continuously developed through my ‘COSMORGANIC’ http://www.aletamichaletos.com/gallery/Cosmorganic 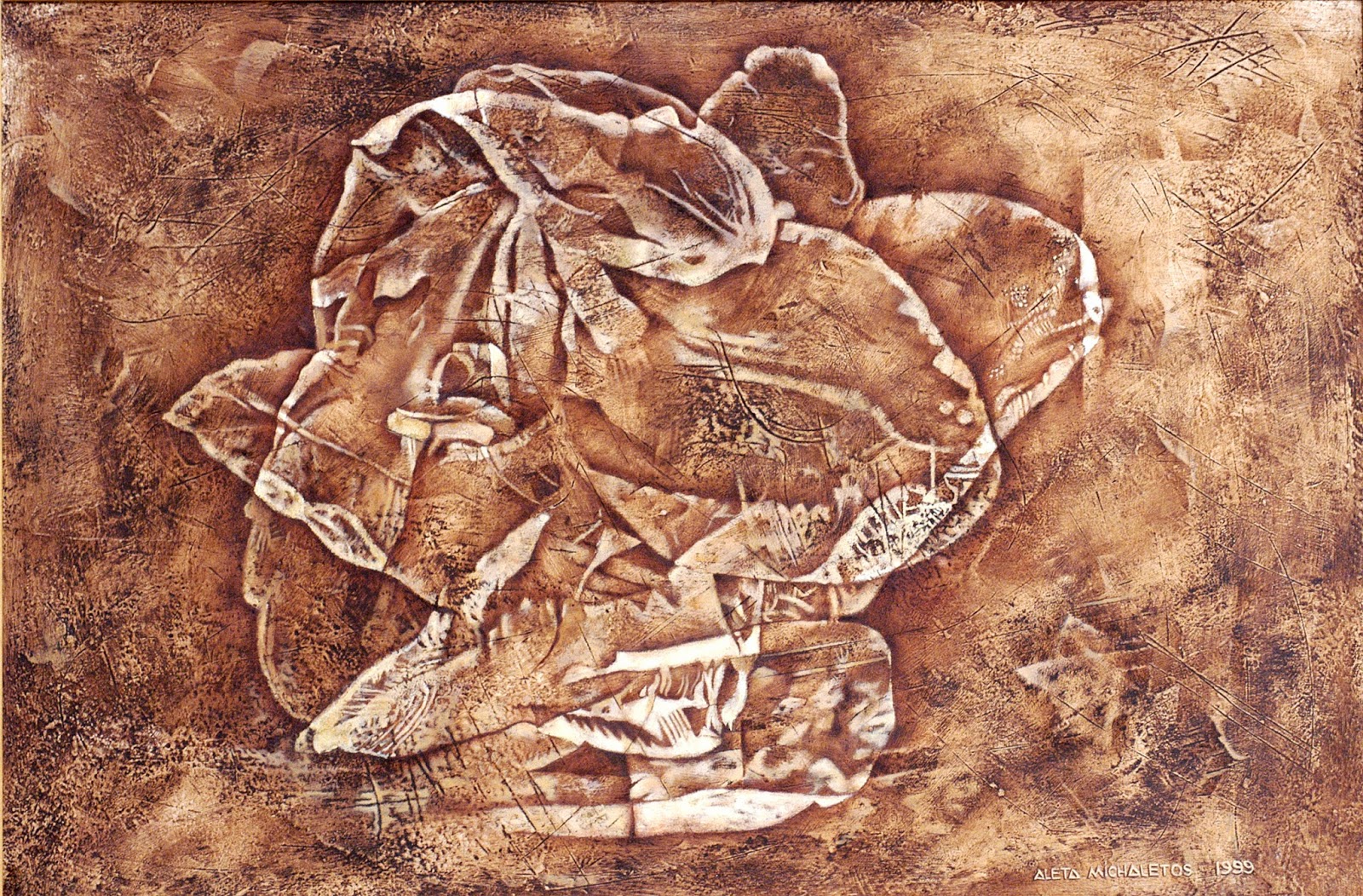 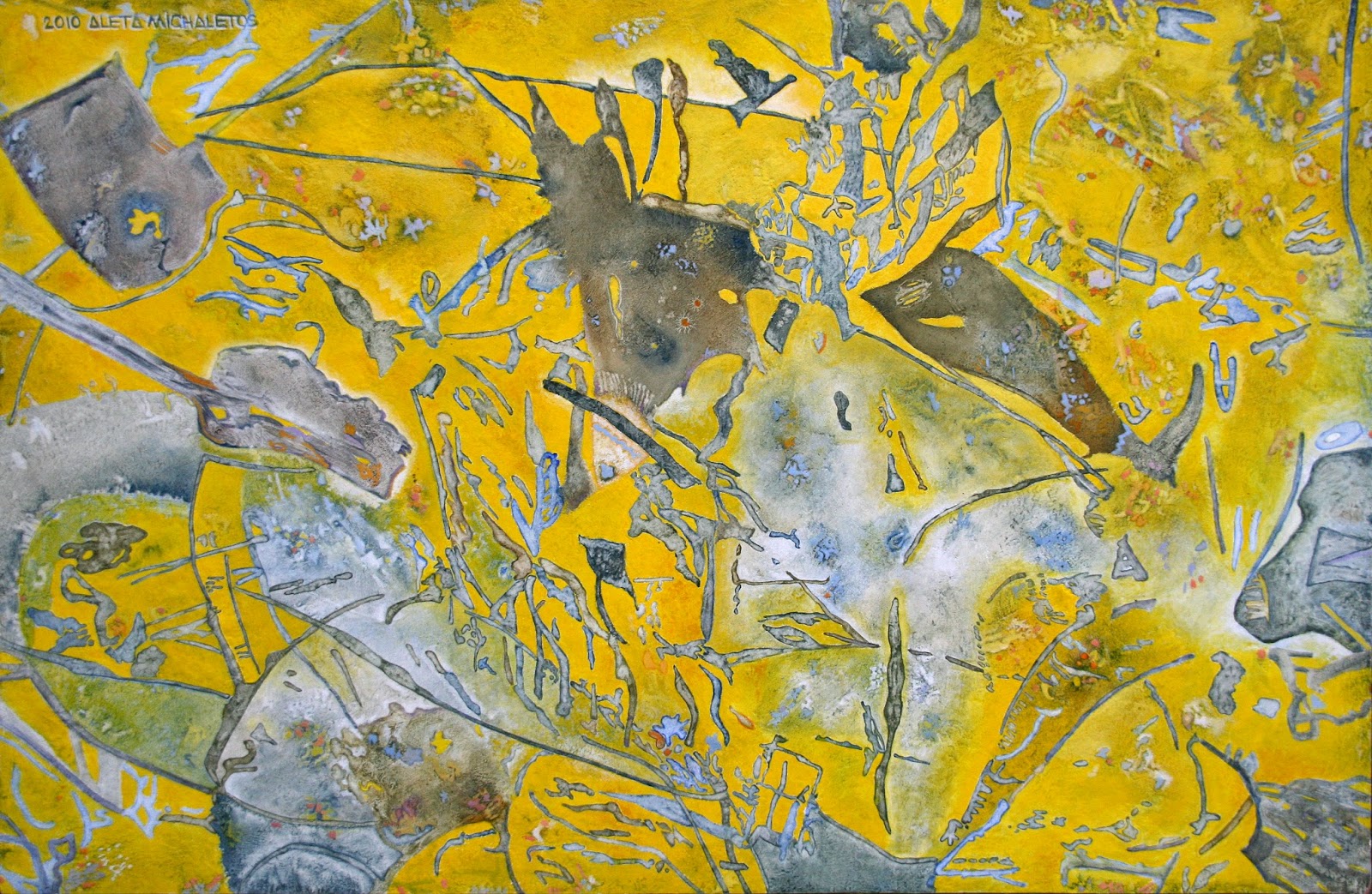 I attempt to creatively illuminate that which weaves all particles together – that which creates the fabric of the Universe, instinctively and subconsciously unraveling and unveiling the primordial pattern or mold from which all things originate.
The request from Chantel Dartnall (Restaurant Mosaic) to interpret and visually portray the theme of ‘Salt’ to adorn the Autumn Menu of Restaurant Mosaic in 2011, acted as the necessary catalyst for yet another subtle divergence, resulting in the expansion of the scope of my series which now also includes ‘CRYSTAL UNIVERSES’ & ‘ICE & SPICE GALAXIES’. This theme will most probably result in an elaborate series of paintings and drawings.
Initially, I was filled with bravado as I attempted to conceptualize the crystallization of such an immense theme as ‘salt’ but I was soon humbled by the vastness of what I was confronted with. Here I was trying to grasp the ultimate paradox! I was confronted with that which, if it is not in perfect equilibrium, spells either life or death.
That which has to be used in subtle balance and which in overdose acts as an emetic or as contradiction, (and which is common knowledge) an enhancer of flavor and palatability! I realized I was merely scratching the surface of the reservoir of invisible subject matter. 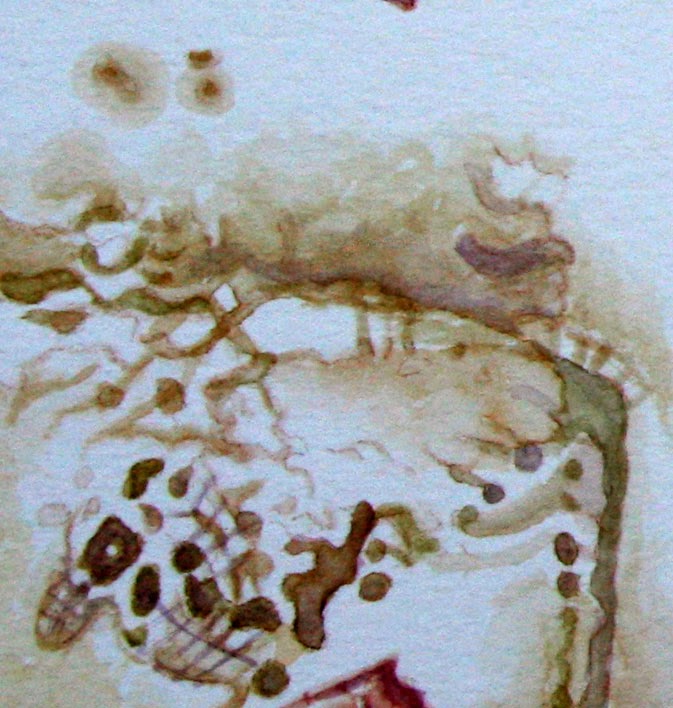 The microscopic beauty of that, which is initially visible but magically disappears once it is added to food during the preparation process, as well as its subtle yet immense power over the ultimate success of the outcome of a dish, has become my point of focus.
That is exactly where my interest lies, that which exists and exerts power but is invisible to the eye.
Now it delights me to draw your attention to a microscopic view (which I have macroscopically enlarged) to enable you to also visually and aesthetically appreciate, that which you can only taste.
Depending on their symmetry, crystals fall into 7 classifications which create the ‘Crystal System’ and a ‘Crystal Lattice’, is a network of fixed points about which ions, atoms or molecules form a crystal vibrate- bejeweled crowns to adorn the heads of Fairy queens….
These delicate Universes immediately reminded me of the dainty dishes Chantel Dartnall so carefully creates, as well as the tiny networks and links in computer grids….. 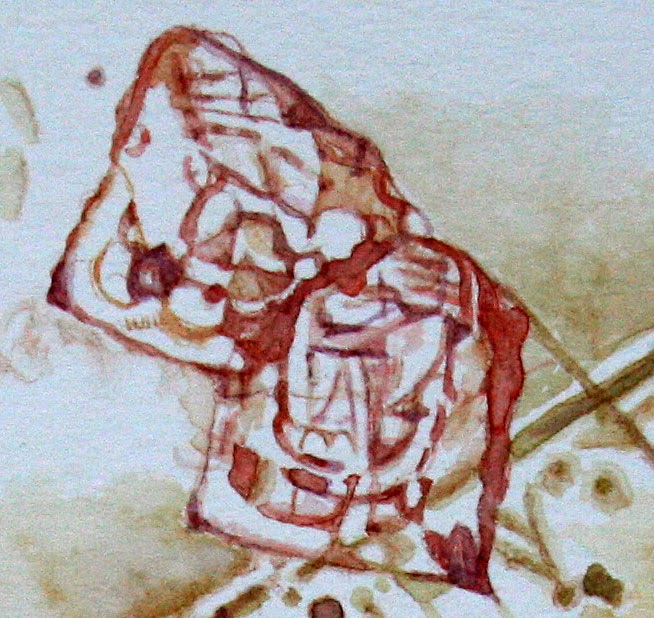 I present the aquarelle as a Talisman. It becomes a catalyst for the imagination to run riot, masquerading as a delicate fishing rod cast into the recesses of the mind, where tiny shreds and tit bits of secret and stored data is gently coaxed from their hiding places, to evoke a banquet of images to enrich our senses.
How can one not but be spirited away by visions of intricate mosaics adorning the baths of Pompeii, or of archaic, torn maps and the ancient routes that were followed and by which salt was transported in exotic, distant lands? We are fascinated by the ground plans of antiquity which conjures the pyramids, lost temples and shrines where elaborate dishes were prepared for princes and pashas, or sacrificed to the gods.
As in a game of chance, where the dice is thrown or the die is cast, the randomness of salt crystals scattered, remind one of a miniature version of the constellations in the Universe. Ingredients are patiently diced and ‘randomly’ arranged on our plates the way an artist would subconsciously mix colors on a palette. 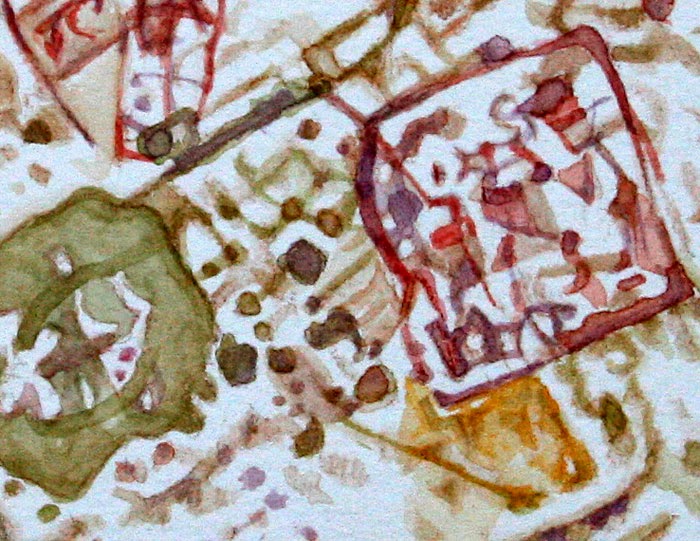 Autumn is somewhere between…..
It is in between Summer and Winter, ranging from the Autumnal Equinox to the Winter Solstice.
and salt?
Its effects range between bland or zesty,
preservation or decay.
The pendulum is gently swaying from Astronomy to Gastronomy….. and back again….
Autumn is a period of maturity verging on decline… a mood, a whiff of decadence lingering in the air….
Autumn, also known as Fall….. evokes images of leaves floating from branches that reach into a mellow sky and waft down lazily, sinking into the deep mulch covering the fertile soil and mirrored by the minute quantities of delicate salt crystals that are measured and sprinkled, scattering like Fairy dust, into the warm dishes where they dissolve and work their magic, quickening the senses and taste buds. 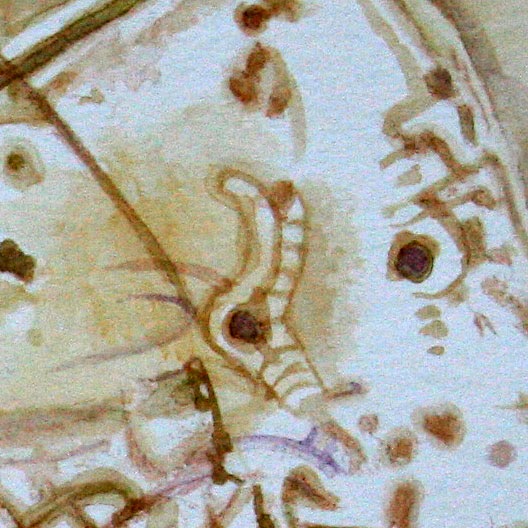 Tiny, randomly scattered dots and spots conjure up the notes on a musical score as well as the various subtle notes and flavors produced by salt and which it is capable of eliciting and extracting from ingredients.
The notes suggest and reveal the characteristics of quality, mood and atmosphere which desire to be observed with infinite care and indulged in through the pure poetry of the dining experience.  (Aleta Michaletos 2011)