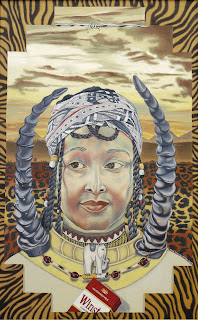 ‘CULTURE QUEEN’
Aleta Michaletos, 1989, oil on board, 570 x 355 mm
Background:
1989 marked the extremely brutal way by which citizens of our country were put to death: the ‘necklace’ method. A tire was place around the victim’s neck and it was filled with petrol and then set a-light with a match. The crowd watched while the victim suffered an agonizing death.
During this period, Winnie Mandela, the wife of the then imprisoned Nelson Mandela, captured headlines. Media-hype, caused not only her name but also defiant photographs of her, as well as any reference to a box of matches or even a match, to send a chill of fear down one’s spine.
I have always been fascinated by paradoxes. Consequently, the mesmerizing and enigmatic beauty of this woman, tainted by everything that we regard as evil, (as portrayed by the press), implanted itself in my subconscious and lay there dormant.
The watering occurred, when I received an invitation to participate in a group exhibition in Johannesburg, titled: ‘QUEENS’. All sorts of ‘queens’ could qualify: gay, royal, bee, etc.
I instinctively ‘knew’ I wanted the fascinating Winnie Mandela to be my ‘queen’.
The intricate process of ‘imagineering’ the whole concept of the ‘yet to be’ painting, was now set in motion.
On the one hand the lady in question had a regal way about her but on the other hand, she certainly was an atypical queen. I started thinking about culture and the differences and contrasts between African and Western culture. Then it struck me! I would anoint her as my ‘CULTURE QUEEN’!
Although I could not imagine her with a conventional crown on top of her head, the images and symbols necessary for the ‘language’ of the painting, gradually presented them selves to me.
I am extremely particular about fostering ambiguity in my work and I welcome and encourage the opinions of spectators as it re-invents the painting for me. It is important to be slightly ‘tongue-in-cheek’ when analyzing this painting. It is amazing how richly the work has developed over the last few years, especially since active participation was sought from the viewer.
The symbols:
To represent African culture, I employed the following symbols: Animal print, horns, African landscape, elephant, bead work and an African woman with traditional headdress.
To represent Western culture, I felt that a packet of cigarettes was absolutely typical and therefore, more than sufficient.
The painting:
The portrait of ‘Culture Queen’, occupies the middle third of the surface of the painting. Her eyes are slightly averted to the ‘left’. Her face has a strange ‘metallic’ look to it, symbolizing her inner strength and the way she has had to ‘steel’ herself against the criticism of society. Her enigmatic smile evokes memories of Da Vinci’s Mona Lisa.
A pair of horns, nearly encircling her head, rest on her shoulders. This is her ‘crown’, which has slipped over her head, forever ‘trapping’ her in her own glory as well as the way the media has presented her to us (whether true or false).
Our history books were filled with stories of the Impis and the horn formation they used as their strategy for attacking. Some viewers read sexuality into the symbol of the horn but alternatively it’s quite possible to view it as a crude form of ‘halo’ that surrounds her face.
Elephants are powerful symbols of Africa but the ‘white’ elephant around her neck could imply that some of her antics, simply cannot be taken seriously.
It was only after the painting had been completed that I read somewhere that her popular name was ‘Ndlovu’, the She-elephant!
In the background, the landscape could be the setting for either a ’rising’ sun or a ‘setting’ sun. The warm, rich colors of Africa are evident, and the ‘blazing’ painting literally ‘glows’ from within.
A stepped geometric frame, tiger skin-patterned, surrounds the portrait. The bottom part reminds one of the collar a ‘court jester’ would wear whilst the top part, is rather ‘monumental….’
A portion of ‘barbed-wire’ connects the two top points of the stepped frame. I recall that the subjects in propaganda photographs, were always placed behind ‘barbed wire’. I also have childhood memories of seeing the ‘washing’ in rural areas, draped onto barbed wire.
As a thinking artist, I find it necessary to re-evaluate all preconceived ideas. By ‘looking at’ my painting, the viewer agrees to accompany me on this journey. These images are capable of generating severe discomfort and downright antagonism in the viewer. The subject has been a constant victim of persecution and humiliation and the similarity in shape between barbed wire and thorns as well as the pain it can inflict on the body, can become an intolerable ‘connection’ for the most of us. In this instance, the barbed wire is elevated above the head and spans the area left open, where the two points of the horns don’t succeed in completing the circle of the crown.
The only clue as to whom the portrait represents is the half-obscured ‘WIN’ on the packet of cigarettes. A cigarette ‘butt’ is poised on the top corner of the packet and is neatly strung on the ‘necklace’ around her neck. The Afrikaans word for ‘butt’ is Stompie. This is the name of the young soccer player who disappeared and with whom the ‘subject’ had been linked. Is the ‘elephant’ trampling the ‘Stompie’ or is it a sign that smoking should be banned?
The viewer is invited to participate in the endless permutations of playing visual, mind and word games, the conclusion remaining as mysterious as the subject, who, AS mysteriously, became Deputy Minister of Arts and CULTURE in 1995.
www.aletamichaletos.com